The design duo Child Studio has recently completed the store interiors for the British spectacle-maker Cubitts in London’s Soho. The neighbourhood has long been considered London’s epicentre of progressive retail concepts, with Supreme, JW Anderson, Palace and Our Legacy having their flagships in the area. The store’s design references the underground venues and subcultures that emerged in this buzzing district, once notorious for its adult cinemas and sex shops.

‘We have focussed our research on Soho’s heyday in the postwar era, looking at the interiors of the neighbourhood’s iconic venues, such as the Formica-clad ‘Bar Italia’ and the legendary jazz venue ‘100 Club’ with its all-red interiors,’ – commented Alexy Kos and Che Huang, the founders of Child Studio.

Cubitts has a strong connection to London, where their glasses are made, and to Modernism as the guiding principle to their design aesthetic. ‘The store’s interior brings those references together in an atmospheric, maze-like environment.’ 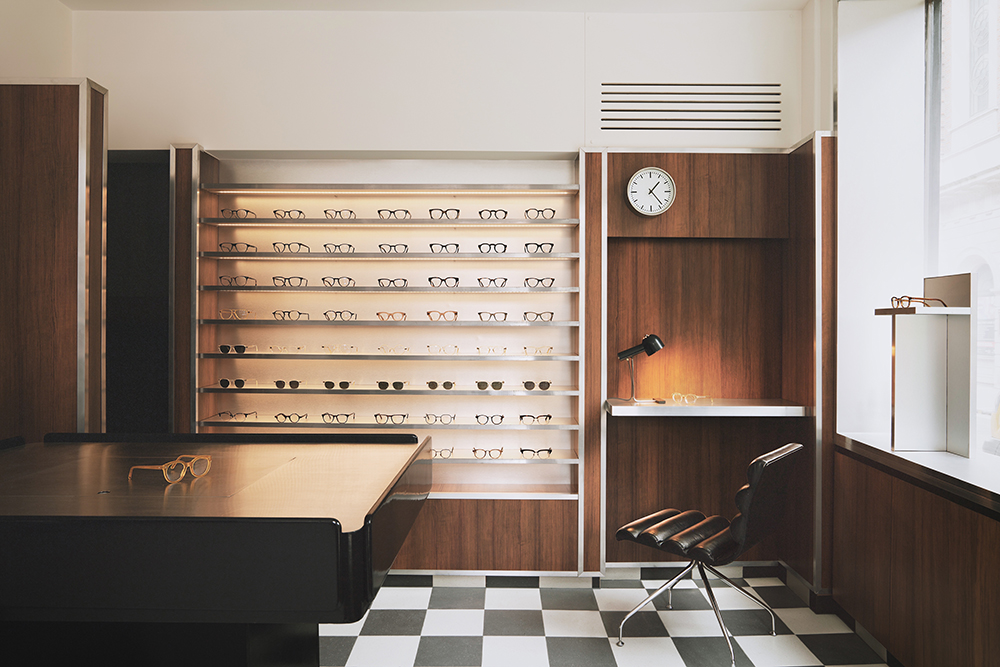 The store’s walls are clad in a faux-wood Formica laminate with aluminium trims around the edges. Stepping in and out, the walls form small nooks for various display features, such as the illuminated acrylic shelving, showcasing a range of colourful acetate chips for bespoke frames. The lightbox signage is integrated into the metal-trim cladding, whilst the black and white checkered linoleum flooring adds to the nostalgic atmosphere. 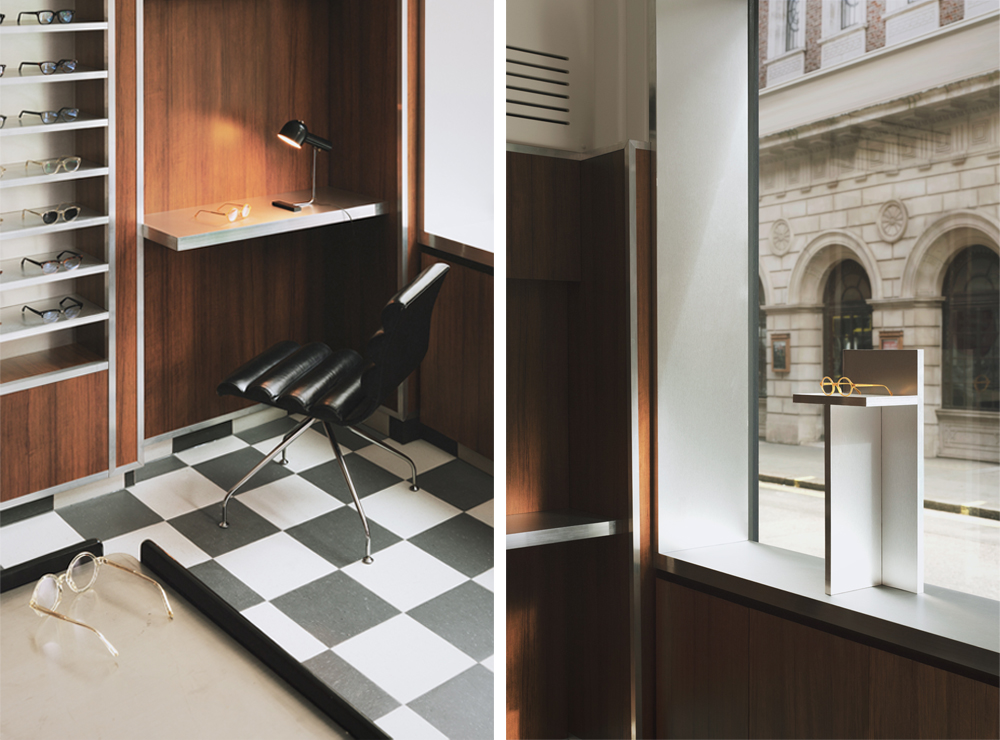 The central feature of the store is the antique ‘Caori’ cocktail table designed by Vico Magistretti in 1961, featuring the brushed aluminium tabletop and several concealed compartments for records and magazines. Child Studio designers have sourced the piece and devised a raised podium for the table, adapting it for the retail environment. ‘Every project tells a unique story and we always look for rare and unusual furniture pieces to add depth and authenticity to the narrative,’ – explained Alexy and Che. The desk lamp is another mid-century find, created by the Czech designer Josef Hurka for the manufacturer Napako in the 1960s.

The narrow staircase leads to the basement, where all surfaces are finished in deep red colour and the neon signs guide customers to the eye-examination room concealed behind the velvet curtain. The basement lounge area is accessorised with the ‘Conelight’ floor lamp by the British designer Ronald Homes and the chrome and leather chairs designed by Giovanna Modonutti.
A collection of limited-edition sunglasses is displayed on the illuminated shelves clad in aluminium-effect Formica, creating a theatrical effect against the dark red surrounding. 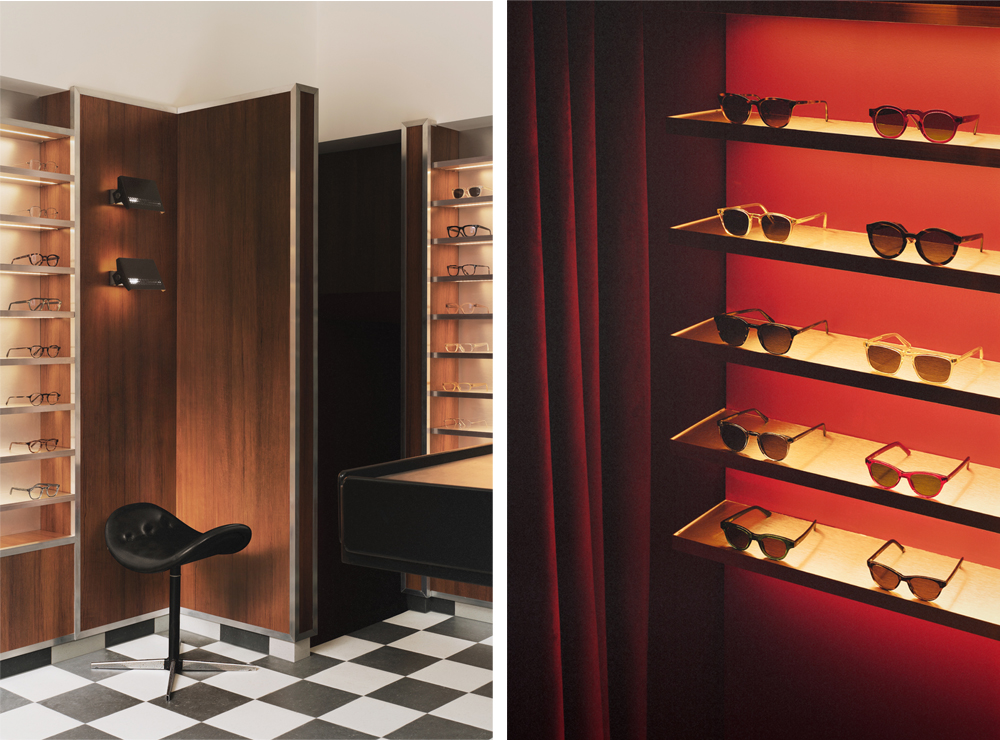 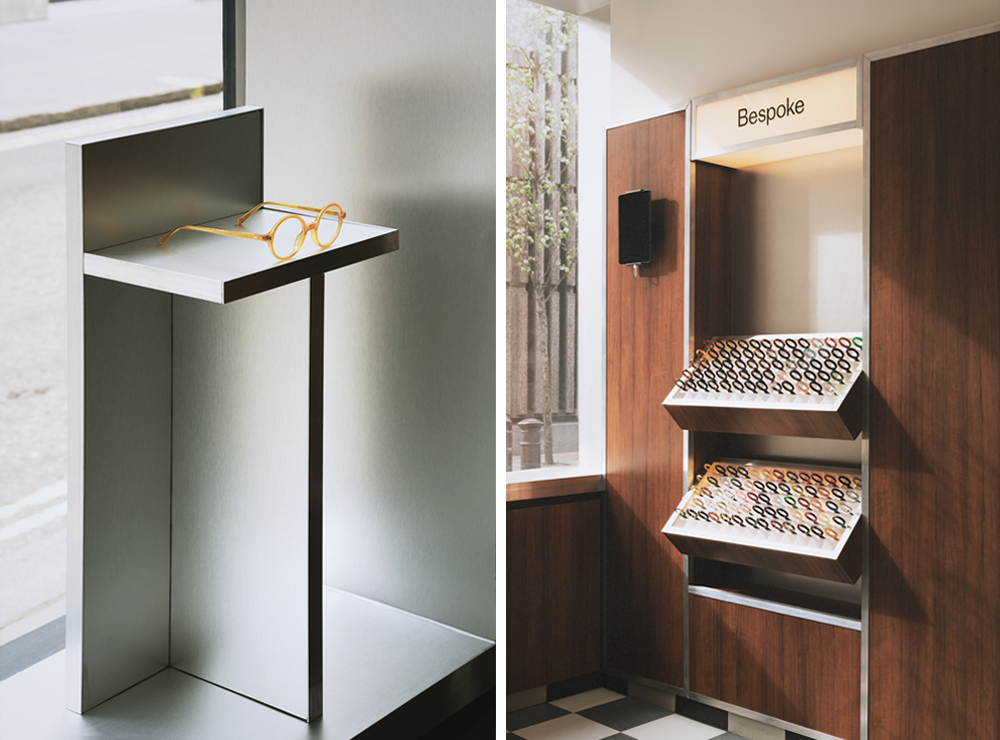 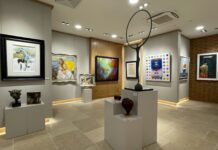 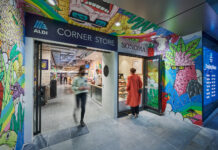 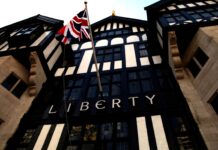 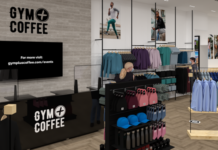 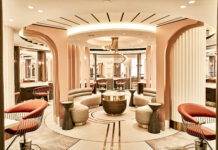 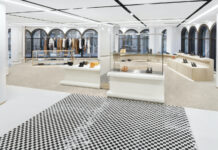 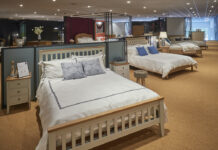 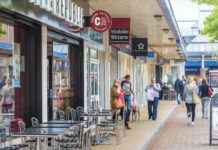 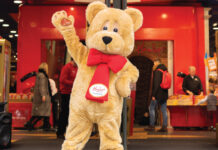 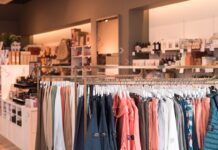 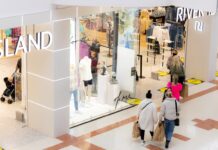 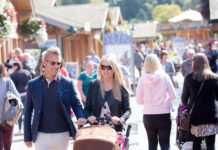